Havana slept for about a week straight after she shed her skin. Although this wasn’t her usual behaviour, as she normally wakes up in the middle of the night, roams around in her tank a bit, then falls back asleep, Thomas and I weren’t very concerned. In that week, she only got up once. I tried to feed her again that particular night, but she refused to eat.

These past two weeks, she’s been up a few hours every night, waking up for longer and longer each time. Oddly enough she seems to have gotten reasonably longer to both Thomas and I, and her skin is definitely more shiny and healthy looking. If she is longer, this would pretty much confirm our suspicion that her previous owner only ever fed her mice, since mice wouldn’t have given her the calcium she needed to grow to her full potential. Although we tried to feed her yet again at the end of last week, she refused to eat. I’m guessing that single large rat we fed her way back was a lot more filling than the mice she’s used to eating, so she’s not hungry enough yet. We’ll just have to keep trying until she’s hungry.

Edit [01/10/2013]: I did end up doing a size-comparison post with before and after pictures of Havana to see if she grew after her shed, and it looks like she did grow at least a bit. 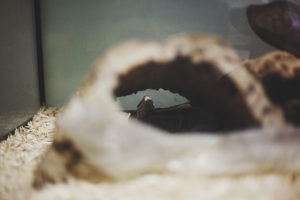 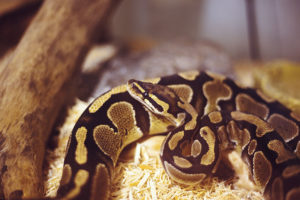